Many believe that bitcoin’s price is still in the emerging phase. They note that its market cap is still tiny compared to other asset classes:

The #1 reason advisors say they like investing in bitcoin is its low correlation – making it an outstanding addition to a diversified portfolio.

And then there’s bitcoin’s performance. With little attention devoted to this emerging asset class, many are surprised to discover that bitcoin is the best-performing asset since its inception. Its returns make it the best investment for the past 1-year, 3-year, 5-year and 10-year periods as of May 2020, according to OffTheChainCapital.

That said, bitcoin is an extremely volatile asset. The S&P 500 Stock Index’s average return is 10% per year; bitcoin often moves that much in a day – and it’s not unheard of for that to occur in a single hour. 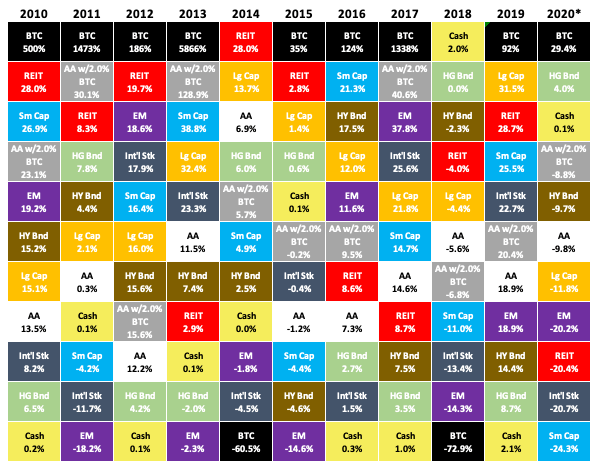 While traders and speculators enjoy trying to guess bitcoin’s next move, investment professionals like yourself know the folly of trying to engage in market-timing. That tactic is difficult enough with stocks; it’s downright foolish to attempt with bitcoin. Indeed, despite bitcoin’s long-term success as an investable asset, those who miss even a few of its biggest moves miss the bulk of the gains, as shown in the charts below.

This is why anyone contemplating an investment in bitcoin should plan to hold their investment for years, even decades. An effective rebalancing strategy, coupled perhaps with dollar cost averaging, can be applied as well.

And keep your allocation small. Given the combination of potential outsize returns over time and the risk of complete loss (whether due to technological obsolescence, market competition, government intervention or changing investor sentiment), its imprudent to instead excessive portions of one’s portfolio into digital assets. Frankly, a 1 percent allocation could be plenty.

Consider the impact on investing a portion of a client’s portfolio in bitcoin from January 1, 2017 through December 31, 2018 – an extremely volatile period.

Based on these returns, let’s consider how three different portfolios would have performed:

Even the Wipe-Out Portfolio showed that investing in what becomes a worthless asset isn’t so bad – if you limit your exposure to 1 percent. The two-year return for the Wipe-Out Portfolio was just 1.1 percent less than the Traditional Portfolio – annoying to be sure, but hardly something that would destroy an investor’s ability to achieve their future financial security.

And this scenario does not include the impact of rebalancing, dollar cost averaging or diversification (by investing in more than just bitcoin for the digital assets allocation; there are, after all, dozens of investments available in this asset class).

The conclusion is indisputable: The upside reward of adding a small amount of digital assets to a broadly diversified portfolio dramatically exceeds the downside risk.

NEXT: COMMON OBJECTIONS TO INVESTING IN DIGITAL ASSETS

Why Are Digital Assets Such a Big Deal?

Regulators’ Views Are Shifting from “No” to “How”

Corporate America is Starting to “Get It”

Institutional and Retail Investors Already “Get It”